On January 2022 Patch Tuesday Microsoft patched CVE-2022-21881, a Ntoskrnl bug used at Tianfu Cup 2021 to escape the Google Chrome sandbox. In this article we will focus only on the root cause of this bug, leaving any details for its further exploitation for a future blog post.

At least to my knowledge, there is no public information regarding this bug. The only information we have is that it could be a race condition (according Microsoft CVE description the attack complexity is set to High) and that the first vulnerable Windows version is Windows 8.1. For this reason, the only way to understand the root cause of this bug is to do some patch diffing and compare the ntoskrnl binaries before and after they have been patched. Time to fire up BinDiff to analyze the Microsoft’s Patch!

The names of these functions look pretty suspicious! It is plausible to assume that the bug consists in a Use After Free caused by a race condition because these functions’ names sound like they are responsible for incrementing and decrementing an object’s usage count. Let’s check if we are right!

In the next steps we will understand how to trigger the bug and get a crash on a vulnerable system!

We will now take a quick look at the IopDecrementCompletionContextUsageCount function. 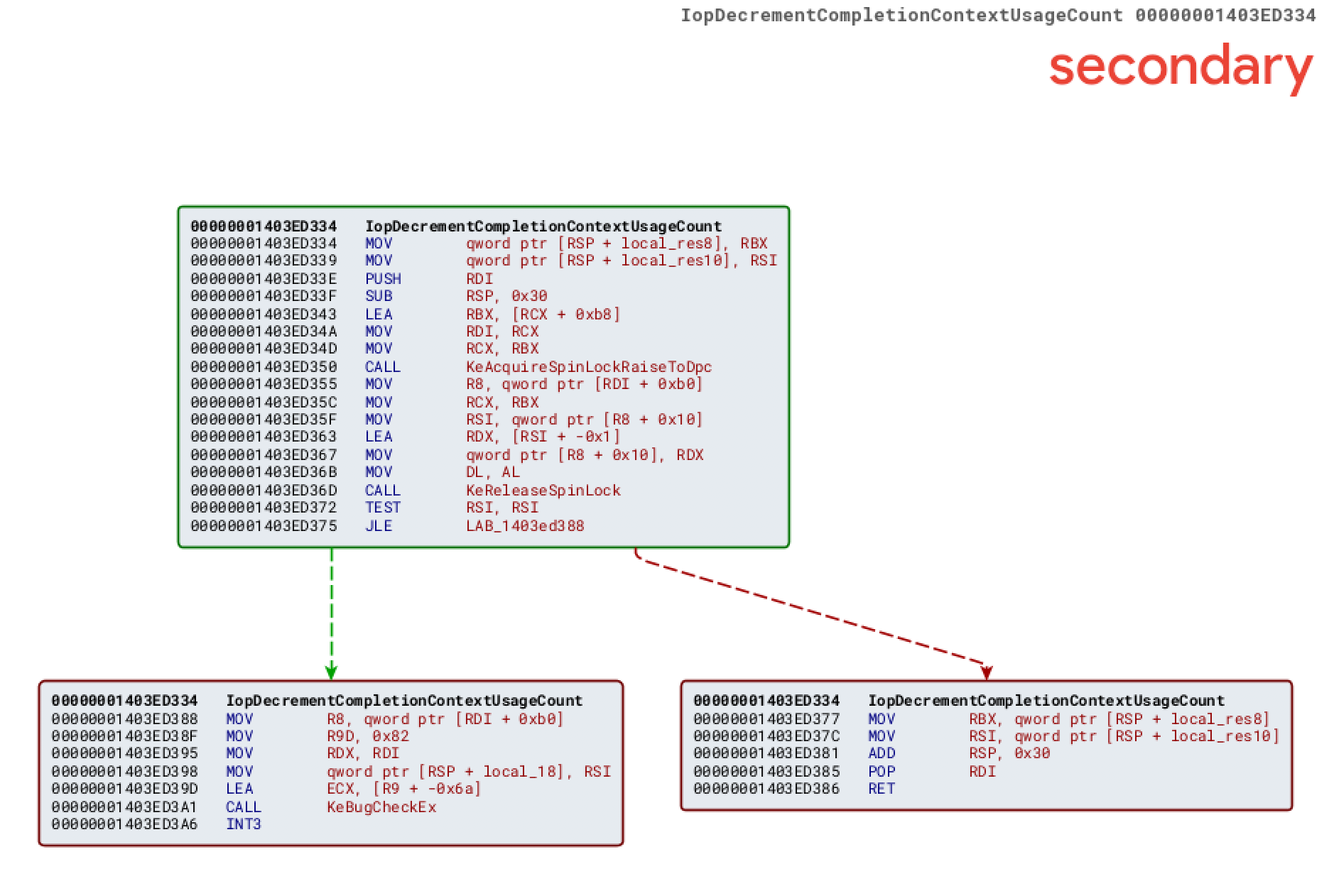 A positive result pops up: the IO_COMPLETION_CONTEXT structure, present also as field of the structure FILE_OBJECT. 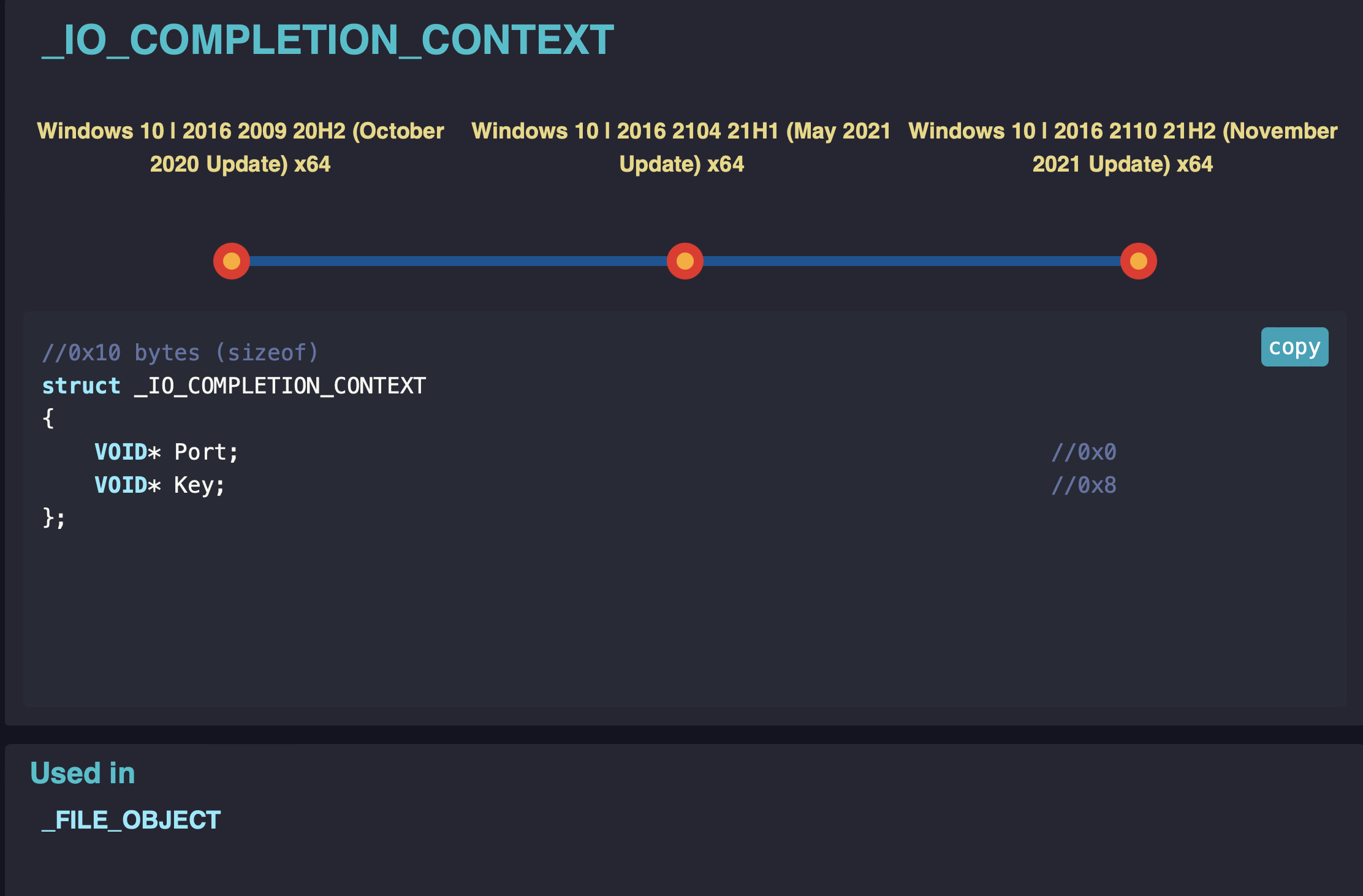 Bingo! As we can see from the picture above, the CompletionContext is a member of the FILE_OBJECT structure at offset 0xB0. 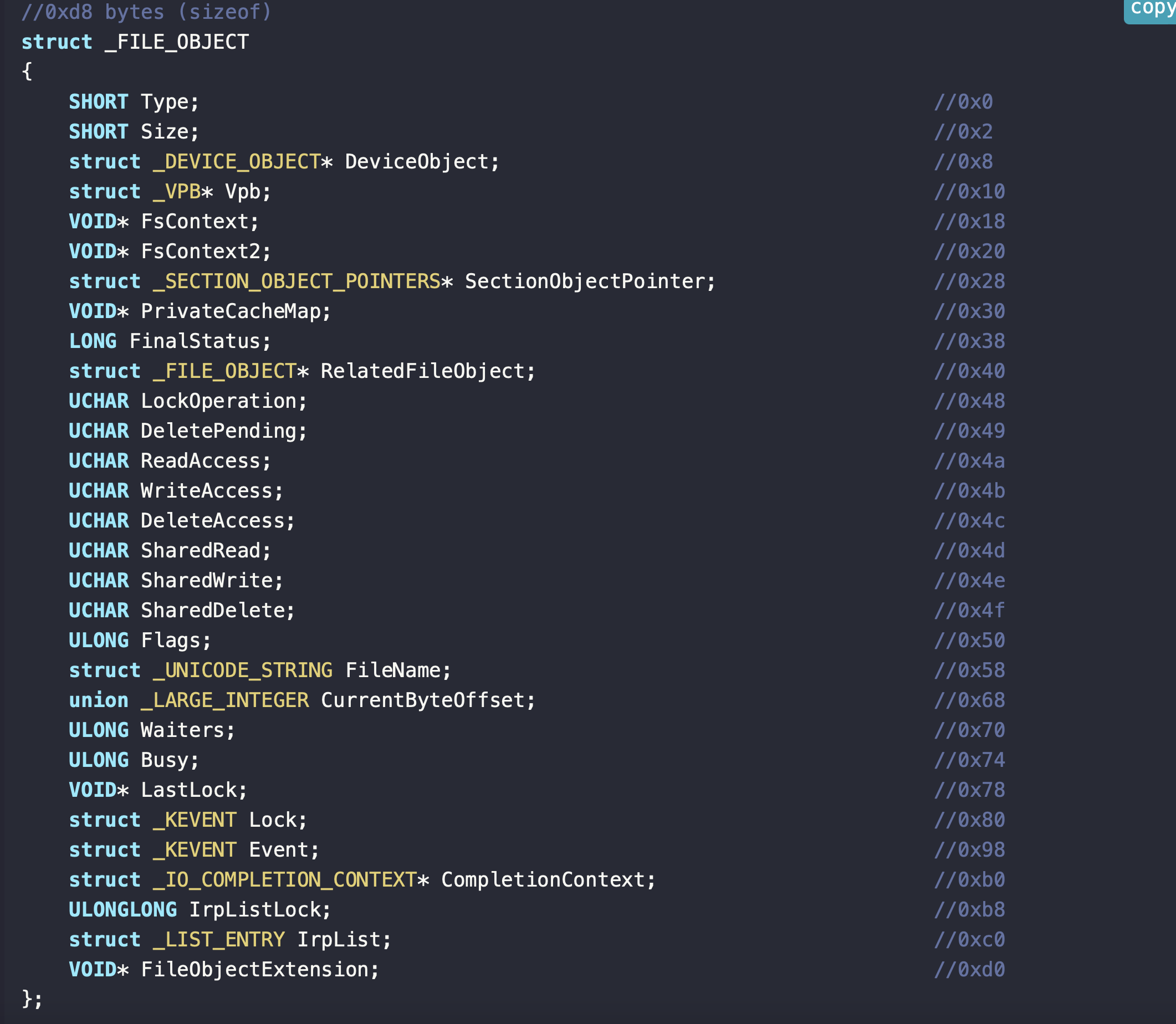 Let’s now have a look at which functions have been modified after the patch in the picture below:

Since we suspect the bug being a Use After Free somehow related to a IO_COMPLETION_CONTEXT object, we should first check if any of the patched functions is responsible for freeing or replacing a CompletionContext object.

The IopReplaceCompletionPort function caught our attention! Let’s compare the vulnerable function with the patched one! 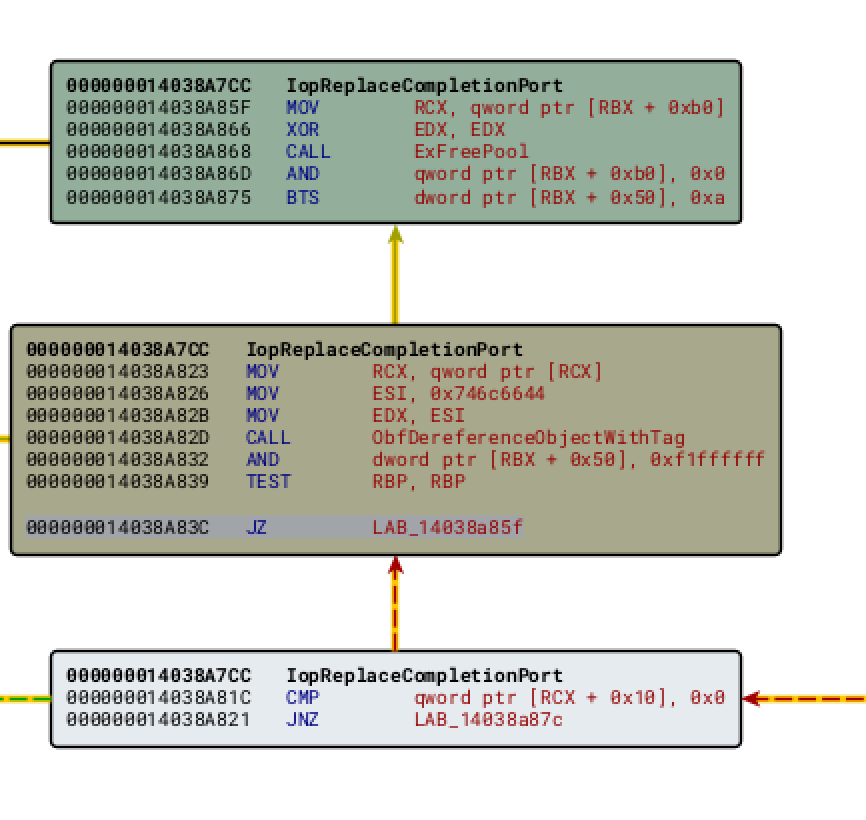 As we can notice in the picture above, in the patched version the function will check whether the value at offset 0x10 of the CompletionContext structure is zero before freeing the CompletionContext object at offset 0xB0 of the FILE_OBJECT structure. At the same time, the vulnerable function does not carry out this check! Our suspect of this bug being a Use After Free becomes more and more reasonable.

It’s time to make a quick recap of what we’ve learned so far:

The next logical steps will be to understand how to allocate a CompletionContext for a FILE_OBJECT and how to call the IopReplaceCompletionPort to free this object. Let’s start from the latter!

The only function IopReplaceCompletionPort gets called from is the NtSetInformationFile syscall. Before doing any reversing of this function, let’s simply read the Microsoft’s documentation about this function to speed up our analysis.

The most interesting parameter of this function is the FILE_INFORMATION_CLASS: Microsoft provides some examples of the possible values in its documentation.

The FileReplaceCompletionInformation value immediately caught our attention! The description of this FILE_INFORMATION_CLASS value helps us significantly: it explains both how to trigger the free of a CompletionContext object and how to create/assign it to a FILE_OBJECT!

More specifically, the API CreateIoCompletionPort is responsible for creating an I/O completion port and associate it with a specified file handle, while the NtSetInformationFile function can be used to free the associated COMPLETION_CONTEXT object by setting the port handle field of the FILE_COMPLETION_INFORMATION structure to NULL and choosing the value FileReplaceCompletionInformation as FILE_INFORMATION_CLASS.

We must keep in mind that this vulnerability is not a “simple” Use After Free, but a Use After Free caused by a race condition. This implies that in order to cause a BSOD it is needed to create at least two racing threads running concurrently, which will keep on attempting to trigger the vulnerability. One of these threads will be responsible for freeing the target COMPLETION_CONTEXT object stored at offset 0xB0 of the FILE_OBJECT, while the other one will have to trigger the usage of the COMPLETION_CONTEXT object freed by the other racing thread.

Our POC will rely on the creation of two concurring threads:

The last part of our journey will consist in triggering a BSOD. In other words, we now need to understand where the “freed by another racing thread” COMPLETION_CONTEXT object is actually used, understand how to trigger its usage and call the needed API from Thread 2!

Before starting tackling this problem, let’s have a look at the code for Thread 1.

Why should we look at this information? If we remember our quick analysis of the patched IopReplaceCompletionPort function, the COMPLETION_CONTEXT object gets freed only if the usage count of the object is set to zero. In order to understand where the “use” of freed object happens, it is enough to look at the functions which will increase the usage count of the object to avoid it being freed by another object while being used! As we can see, there are three functions which increase the usage count of the target object. Which one should we choose? In this phase of the learning process, our goal should be to trigger the crash as soon as possible in order to be sure whether our assumptions regarding the root cause of this bug are correct or not. For this reason, we will choose to trigger the bug by calling the NtLockFile syscall. Understanding the optimal code path to successfully exploit this bug is a topic for another post, in which we will focus on actually turning this bug into something more interesting than a mere BSOD.

Why did we choose the NtLockFile function?

We will now need to understand where and how the CompletionContext (stored at offset 0xB0 of the FILE_OBJECT structure) is used by the NtLockFile function!

The NtLockFile will first verify whether the CompletionContext is set to null or not as we can see in the picture below: 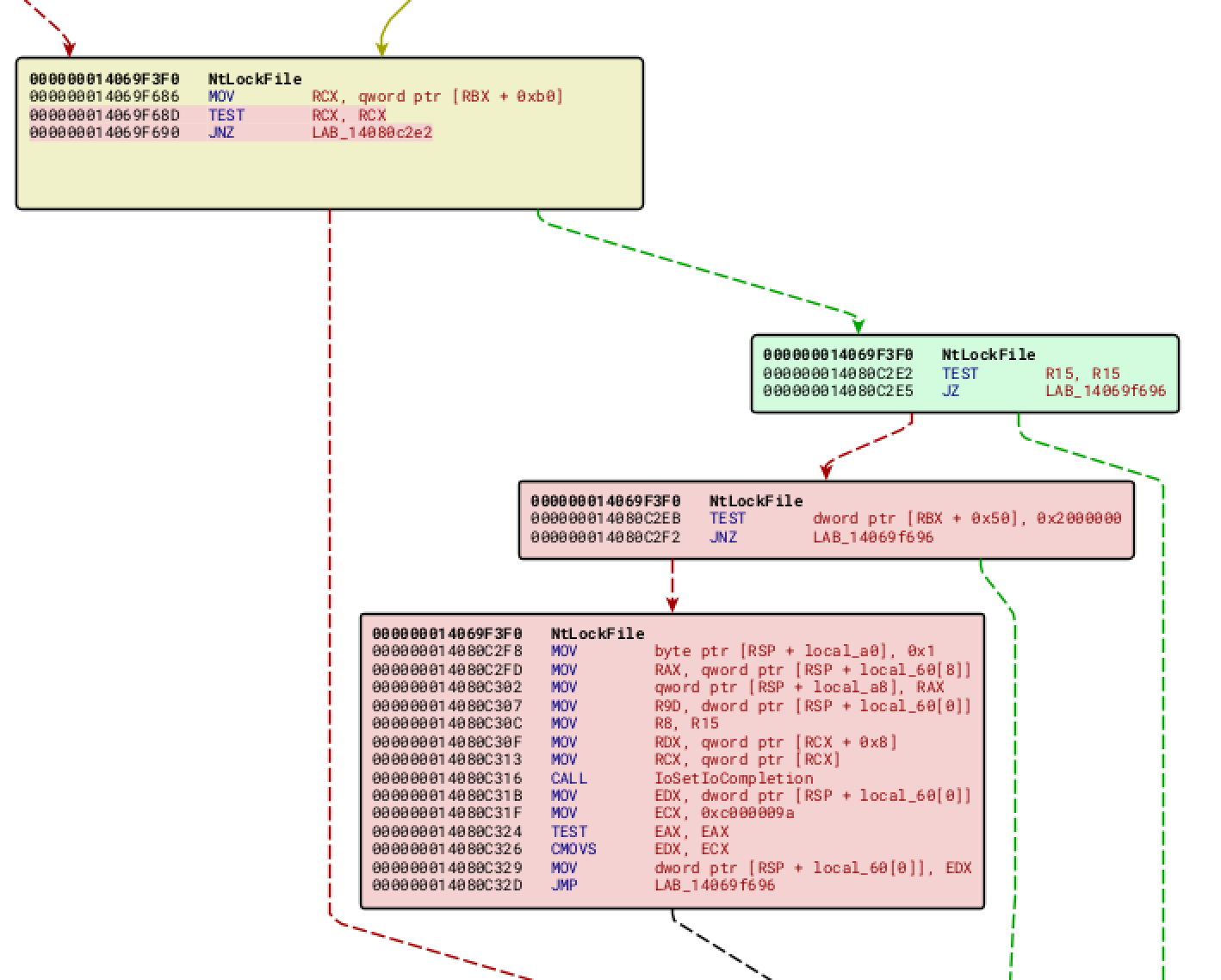 If it is not set to NULL, it will dereference its Port and Key values and pass them as parameters to the function IoSetIoCompletion.

This is the reason why the patched IopReplaceCompletionPort allows the CompletionContext to be freed only when its usage count is set to zero! To cause a crash we will simply have to create a racing thread which will run concurrently with Thread1 (responsible for freeing the CompletionContext). The thread will keep calling the NtLockFile function (and NtUnlockFile, since the file will be locked and we will need to keep locking and unlocking it until we hit the race window and BSOD).

Let’s now enjoy our kernel BSOD in the picture below:

The NtLockFile function will pass the values from the freed dereferenced COMPLETION_CONTEXT object to the IoSetIoCompletion function, which will then access an invalid memory area and trigger a BSOD!

Congratulations to SorryMyBad for finding and exploiting this bug! As already stated before, the goal of this blog post is to show the readers how to understand the root cause of a bug by just looking at its patch. I do not think that calling NtLockFile is actually the right way to exploit this bug: the race window is too tiny to be feasible to reclaim the freed memory in a meaningful way before it will be used by the vulnerable function.

In my personal opinion, the only viable code path to trigger this bug is from the IopCompleteRequest function: the race window is much wider and I have seen interesting locking points which could make the exploitation of this bug easier.

I will try to exploit this bug in the next days and publish my findings in a new blog post. Stay tuned!